We may often see abandoned cats or dogs wandering around the city and searching for food in trash bins. As animal lovers, we feel sad that these little guys are forced to suffer for whatever reason. All animals deserve to be loved and nurtured. Can we do anything for them? 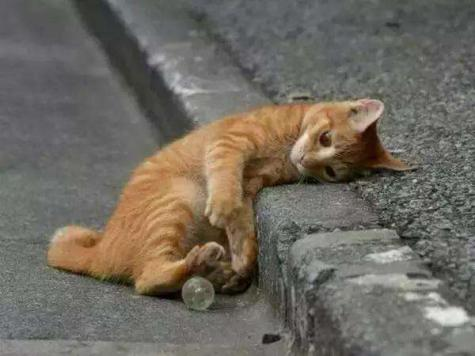 If there is a feeding machine that determines whether it is a cat or a dog in front and feeds it with corresponding food, just like a vending machine in stray animal world, wouldn’t it be great? Let’s use HuskyLens to make one!

The structure part of this project will mainly be built with waste materials like express paper boxes, plastic bottles, etc. Then, we will use the object recognition function of HuskyLens to distinguish cats and dogs through machine learning. Then a micro:bit will be used to process the result and control the servo to open the valve, and deliver corresponding food to cats and dogs. 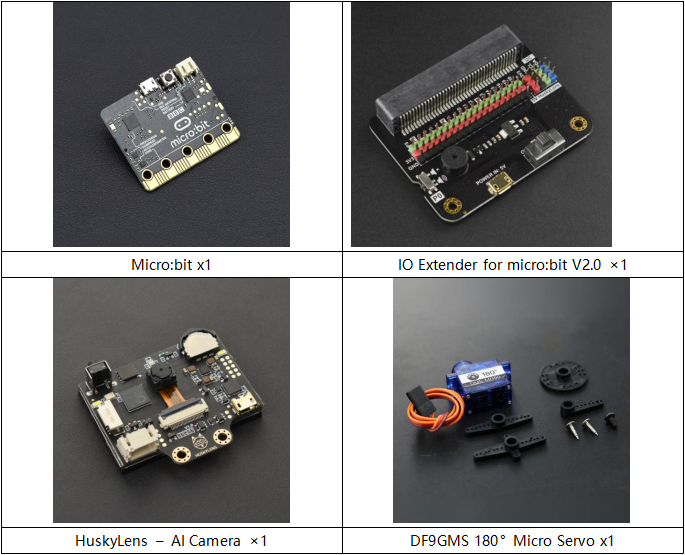 Image recognition technology is an important field of artificial intelligence. It refers to the ability of a computer-powered camera to identify and detect objects or features in a digital image or video. In this project we will use the image recognition of HuskyLens to distinguish and recognize cats and dogs.

1. What is Image Recognition?

Image recognition, a practical application of deep learning algorithm, refers to the processing, analysis, and understanding of images by computer so as to recognize targets and objects in different modes. It is divided into face recognition and product recognition currently. The former is mainly used in security checks, identification, and mobile payment, while the latter can be usually found in the process of commodity circulation, especially unmanned shops, intelligent retail counters, and other unmanned sales fields. 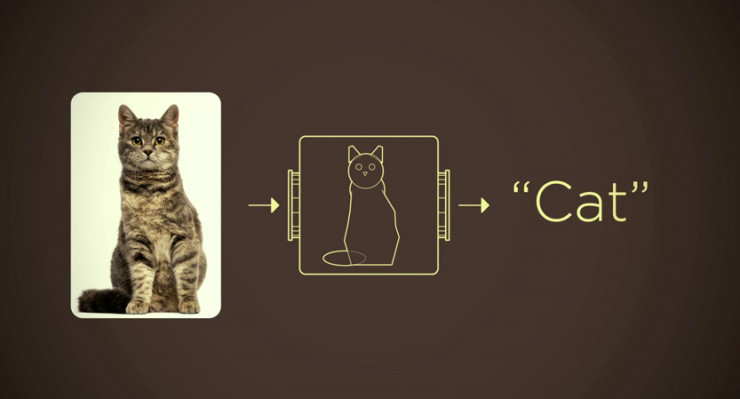 Image Capture: capture the image by the camera, and prepare for later recognition.

Image Pre-processing: analyze and process the images through a series of algorithms.

Feature Extraction: according to the information processed in the previous step, extract the key information, such as color, outline, etc.

Image Recognition: compare the information extracted with the sample base, the HuskyLens sensor image recognition includes a built-in sample library and it can be enriched by learning.

Similarities and differences between image recognition and other recognition:

we have already learned a lot of functions about camera recognition, such as face recognition and color recognition. What are the differences between them?

Color recognition and QR code recognition are easy to distinguish since they are both specific function-oriented.

Image recognition is widely used in modern medicine because of its explicitness, non-invasive, safe, and convenience, especially in clinical diagnosis and pathological research. For example, during the period of COVID-19, AI is deployed to quickly review the CT of the patients.

This function is able to recognize what the object is and track it. 20 objects are supported: airplane, bicycle, bird, boat, bottle, bus, car, cat, chair, cow, dining table, dog, horse, motorbike, person, potted plant, sheep, sofa, train, television. The default setting is to frame and recognize one object. In this chapter, we are going to frame and recognize multiple objects as an example. 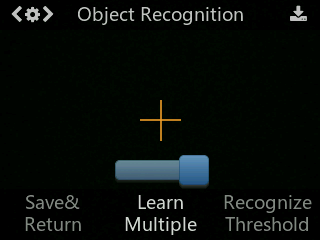 When detecting objects, HuskyLens will automatically recognize them, and the object will be displayed by the white frame with its name on the screen. At present, only 20 built-in objects can be recognized, and the remaining objects cannot be recognized temporarily. 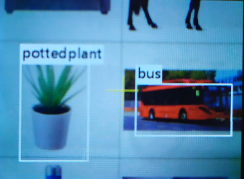 The ID number is related to the order of marking objects. For example: the ID will be displayed as “ID1”, “ID2”, “ID3” in order, and different objects are matched with different colored frames.

When encountering the learned objects, they will be selected by the blue frame, and the name and ID number will be displayed. The size of the frame changes with the size of the object, tracking these objects automatically. Similar objects are with the frames in the same colors, names and IDs. It also supports simultaneous recognition of multiple types of objects, such as recognizing cats and dogs at the same time. 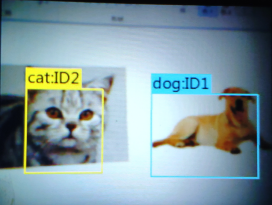 This function can be used as a simple filter to find out what you need from a bunch of objects.

*Tip: This function cannot distinguish the differences between objects of the same category. For example, it can only recognize that this is a cat, but cannot recognize what kind of cat it is, which is different from face recognition that can distinguish different faces.

We will complete the task in two steps. First, we will learn to use the image recognition function of HuskyLens and output the recognized results. Then, distribute the corresponding food according to what is approaching.

In this step, we need to enable the HuskyLens camera to recognize and distinguish cats and dogs and give feedback so that we can release the corresponding food in the next step.

In this step, you need to add the function of sending food based on the previous step, and make the corresponding structure. 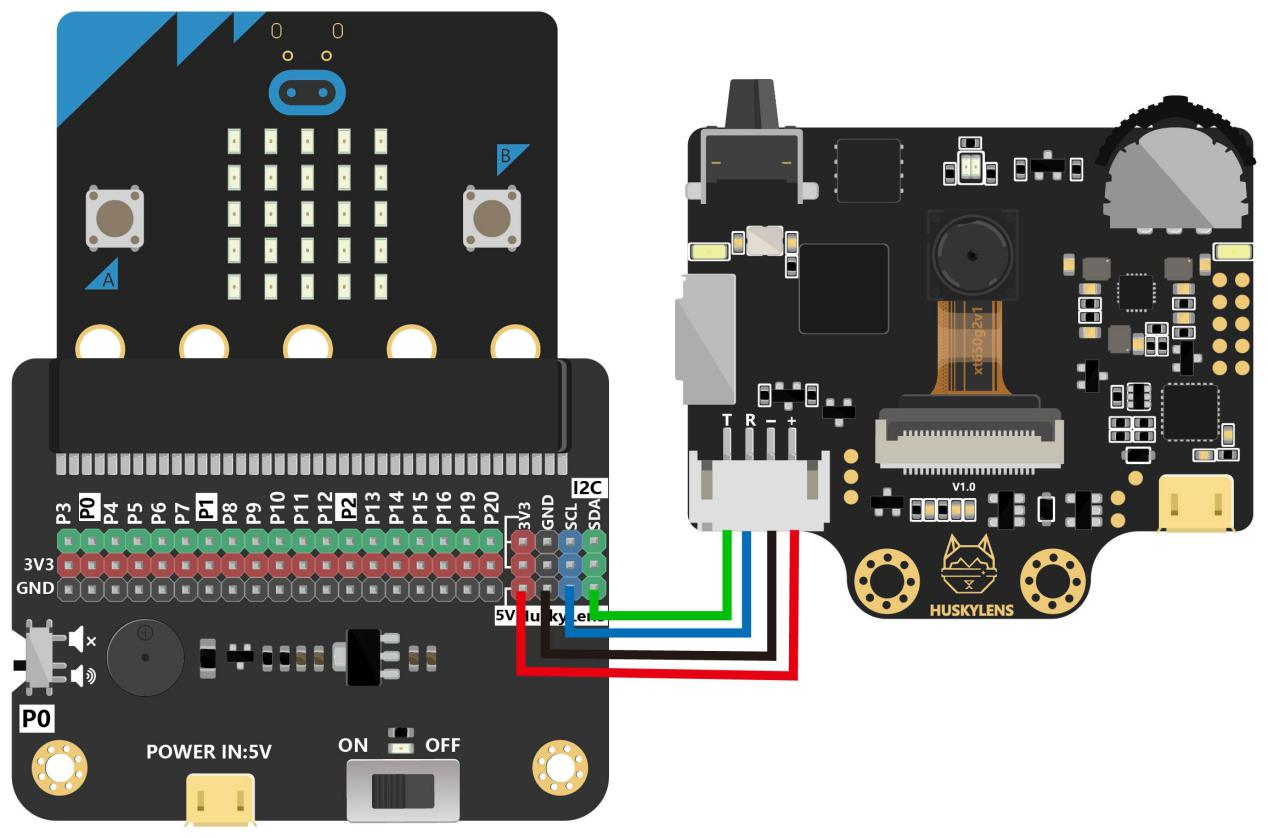 HuskyLens sensor uses IIC interface, you need to pay attention to the wire sequence, and don't connect it wrongly or reversely.

Before designing the program, we need to let the HuskyLens sensor learn the images of cats and dogs. (Note that you need to enable the“Learn Multiple” function first)

Here are the instructions mainly used.

① Initialize only once between the beginning of the main program and looping executions. You can select I2C or Soft-serial, and no need to change I2C address. Please note that the “Output protocol”of your HuskyLens sensor should be set to be consistent with the program, otherwise, data cannot be read. 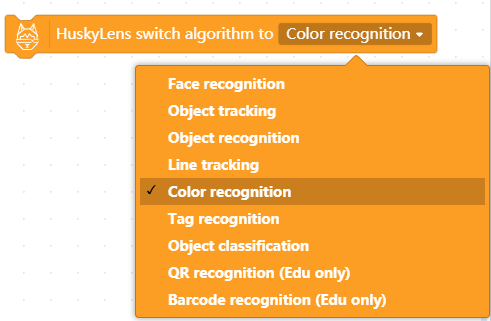 ② You can switch to other algorithms freely, but please note that you can run only one algorithm at each time, and it takes some time to switch algorithms.

④ Check whether there is frame or arrow in the screen from the requested “Result”, including the learned(id>0) and unlearned, and returns 1 if there is one or more.

⑤ Check whether the IDx has been learned from the requested “Result”. 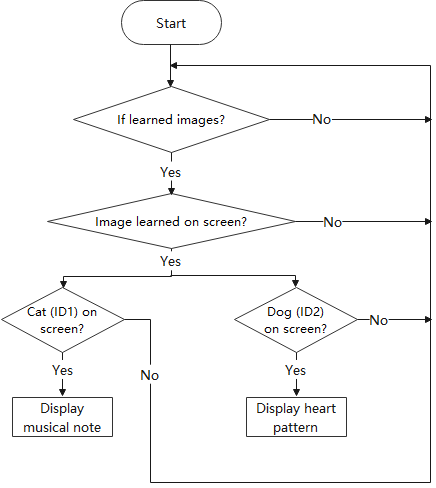 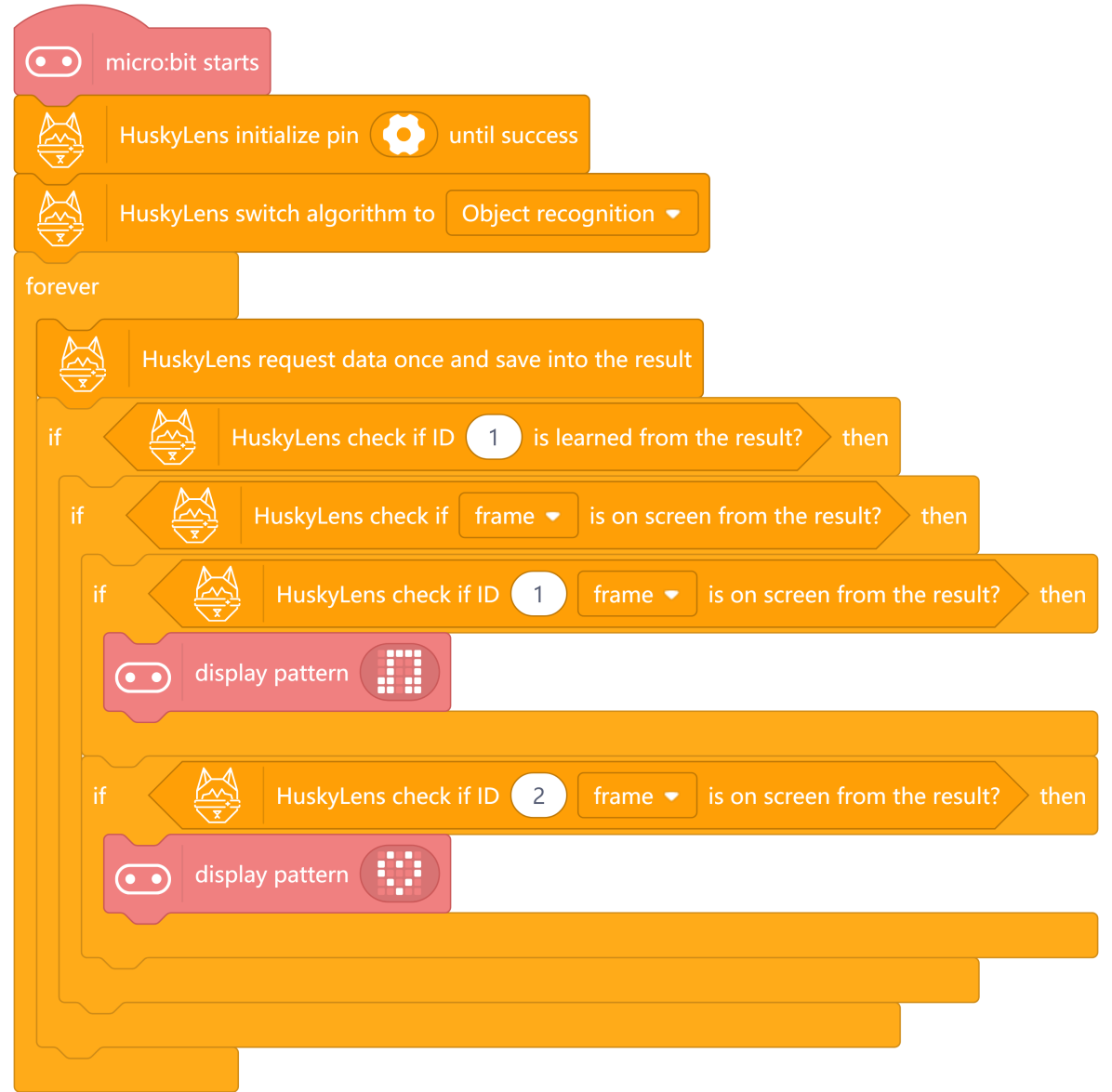 When a cat is recognized in the HuskyLens sensor, a note pattern will be displayed, while a heart pattern is displayed for dogs.

First of all, we chose a square box as the main body of the Vending machine. The structure is simple and firm, and the lid is easy to open and close for internal maintenance, which is quite suitable for this project. 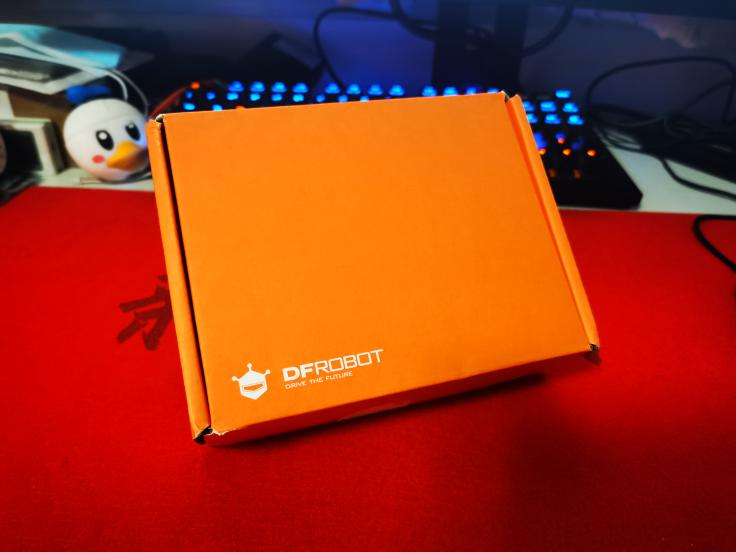 Take the two plastic bottle caps and open a hole on each one as shown in the figure, fix them on the holes on the top of the paper box(cut out with scissors first), and install them symmetrically. 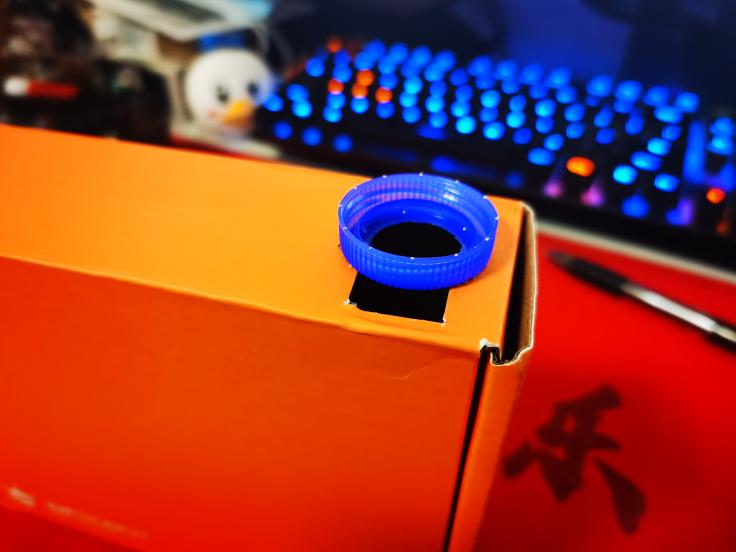 Find two plastic sheets and fold them in half to create a hinge effect. Cut out a slot at one end for easier and more stable binding later. 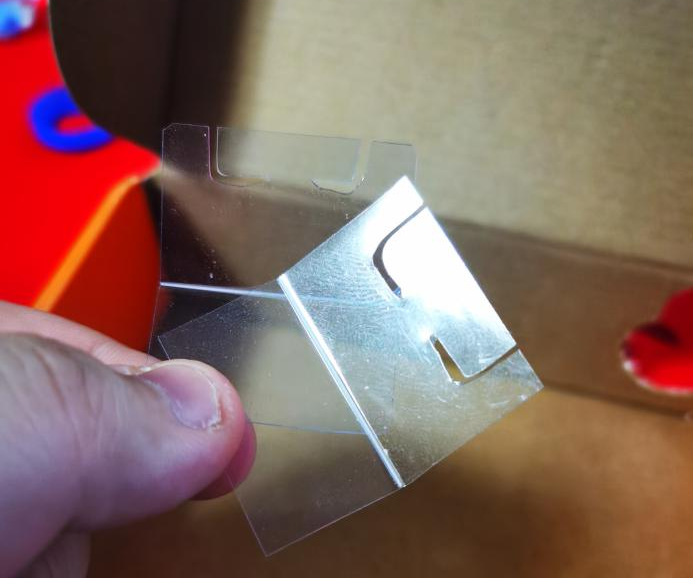 Fix the folded plastic sheets with glue on the inside of the box. Make sure it is symmetric, and that there is a large enough hole for food coming out when the hinge is opened. 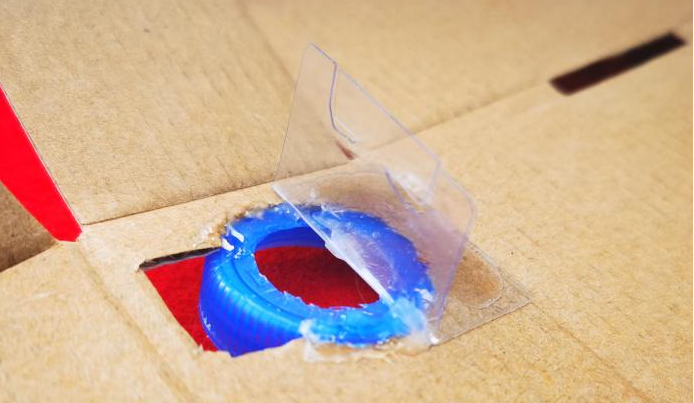 This is a very critical step. First fix the servo with glue. Make two holes for the rocker arm on the back of the paper box, one for leaving space for servo arms’ rotation and the other for the servo wire connection. Remember to calibrate the 90-degree position of the servo. Then tie the left end of the servo arm with a rope and wrap it around the plastic sheet on the left. Then pass the rope through the outside of the box and wrap around the plastic sheet on the right, and finally tie it to the right end of the servo arm, as shown below. 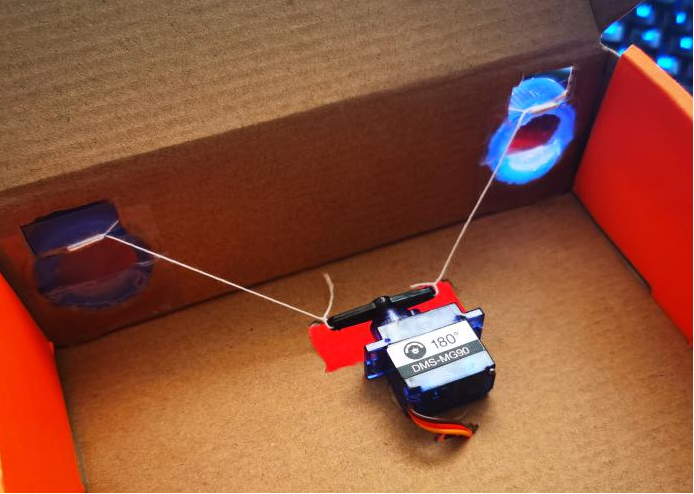 Build the cat and dog foods tracks in the box with cardboard. 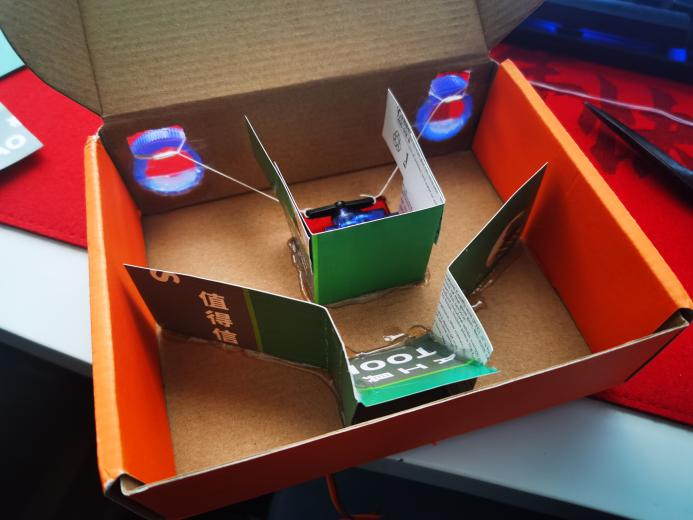 Open holes in the corresponding position of the paper box cover so that the food can come out smoothly. 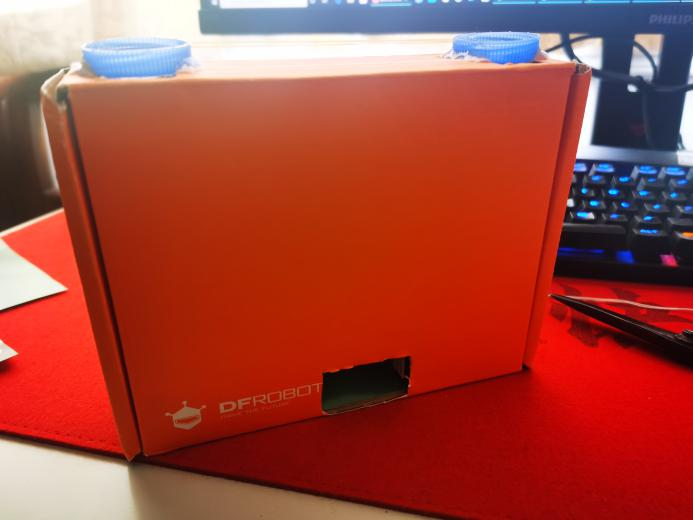 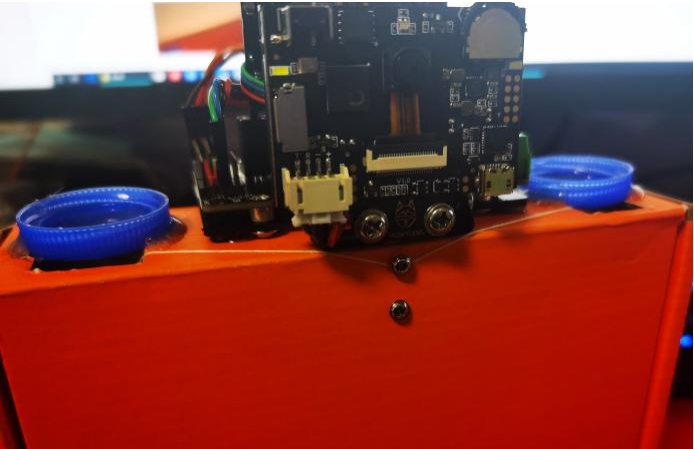 Here, the structure comes to an end. After the electronic part is debugged, we will add plastic bottles for storing the food. 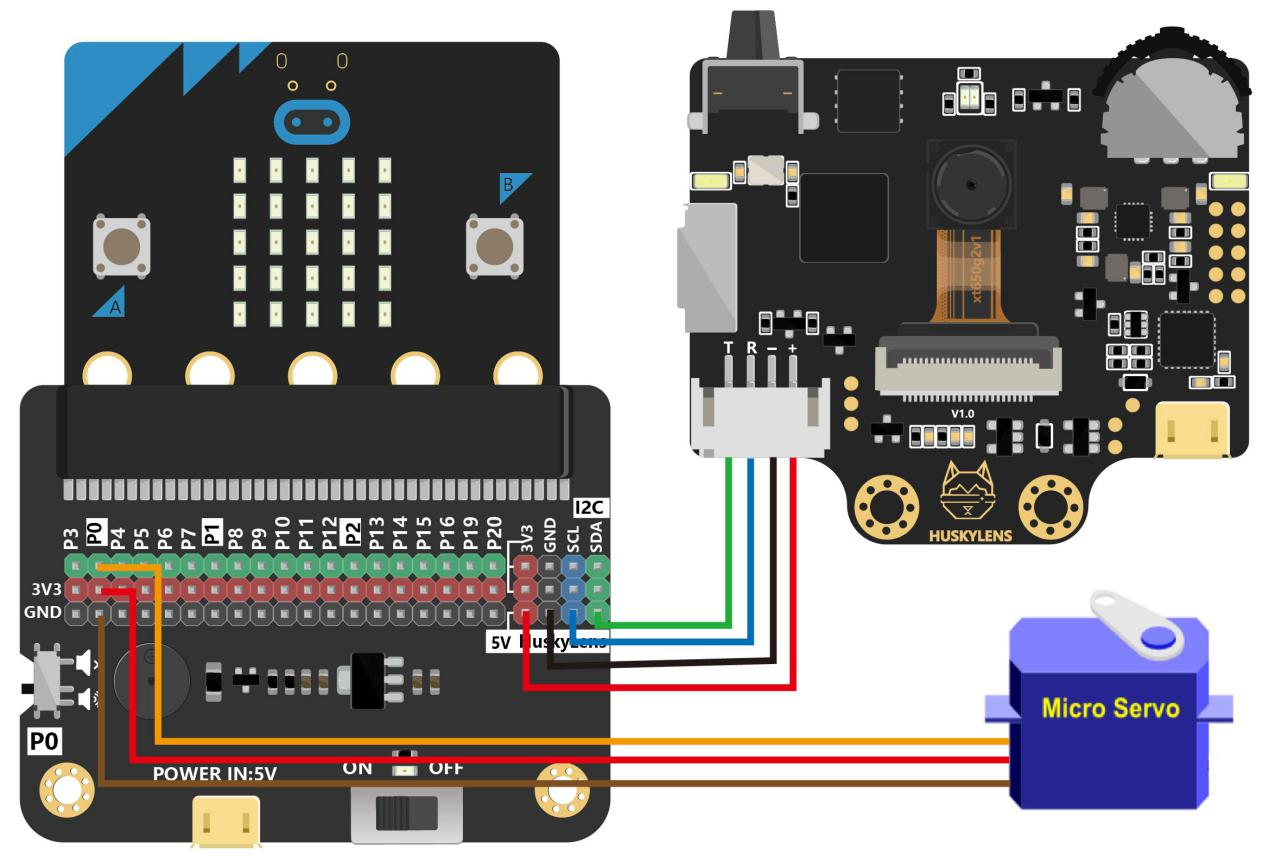 Then we connect the micro:bit board to the computer and open Mind+ to start programming. First, complete the test of the micro:bit board driving servo, confirm the opening and closing of the valve, and adjust the tightness of the rope appropriately. 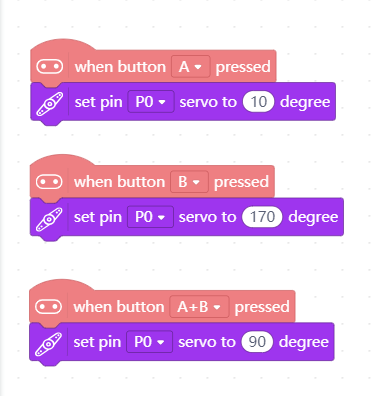 The final main program is much simpler. Start up and initialize the micro:bit matrix, the position of the servo and the HuskyLens camera. Perform recognition every certain period, and once recognize cats and dogs, the servo will rotate to open different valves and the corresponding food will be released. 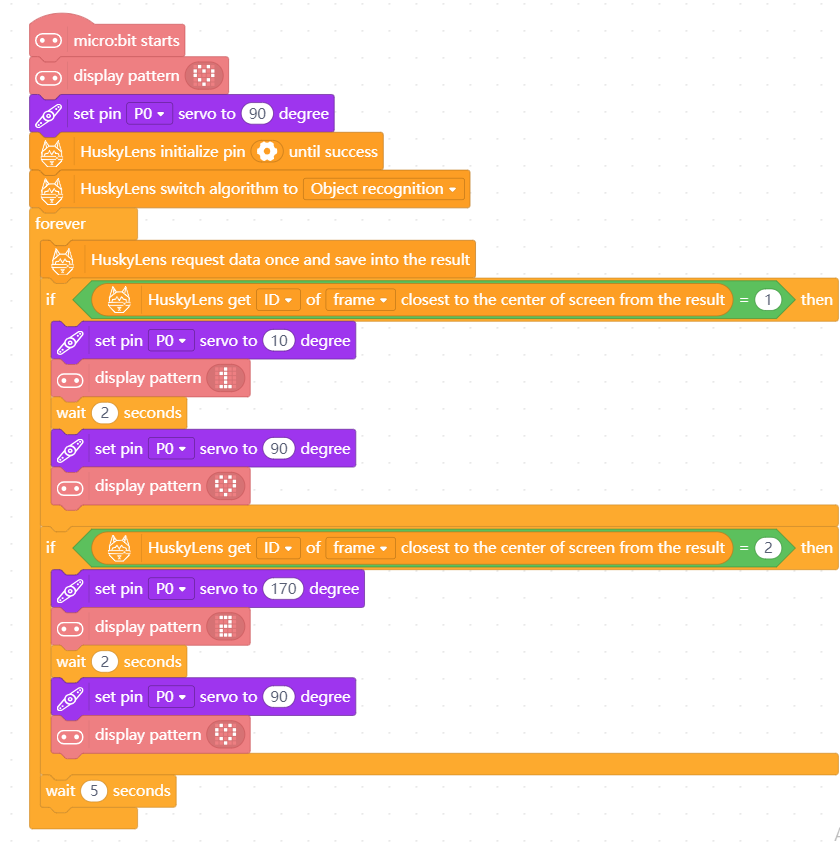 We use materials that can be seen everywhere in our lives combined with the HuskyLens camera to complete a stray Vending machine step by step. It is not only good news for strays, but also convenient for good-hearted people to add food independently, donate their love to help them.

3. Use HuskyLens as an input device combined with micro:bit board and other hardware

After completing the stray feeding machine, if you want to help strays more, can you add a statistical function to record the number of cats and dogs that come to the feeding machine to eat every day, so that the food can be rationed more reasonably. 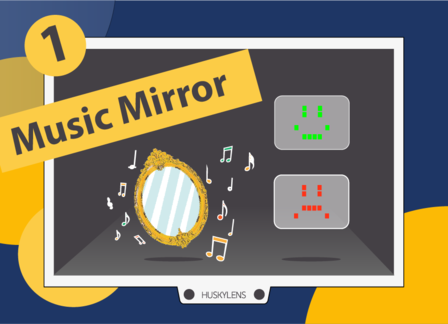 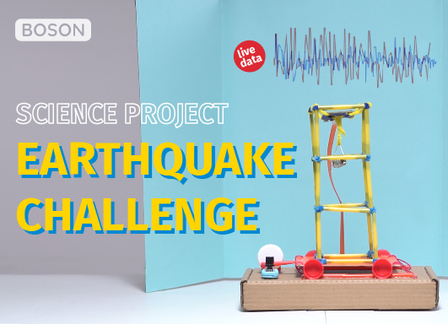 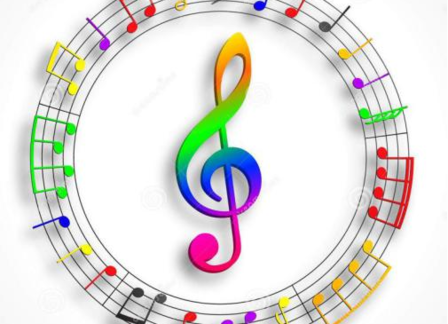 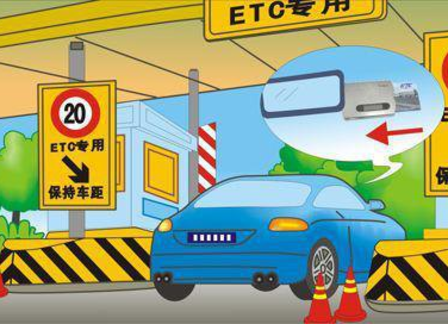